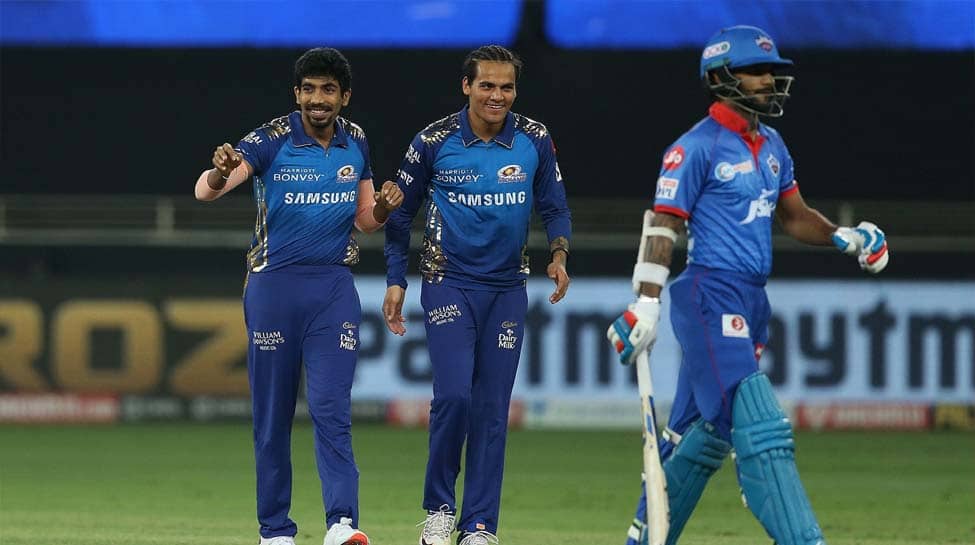 The much-awaited 13th season of the Indian Premier League (IPL) is all set to come to an end with the final clash between defending champions Mumbai Indians and first-time finalists Delhi Capitals in Dubai on Tuesday. Just like its previous seasons, this year has also witnessed some high-octane games, heart-thumping action and mouth-watering battle between the players.

From Jasprit Bumrah recording his best T20 figures to a record partneship between Mayank Agarwal and KL Rahul, a flurry of records have also been broken during this two-month period.

While some new records were scripted during this edition of the lucrative T20 tournament, some old records were also broken.

Let us take a look at those records:

Mumbai Indians pacer Jasprit Bumrah registered his best bowling figures in Twenty20 during his side’s match against Delhi Capitals at the Dubai International Stadium on November 5. The Indian fast bowler claimed brilliant figures of four for 14 in his four overs to help his side restrict Delhi Capitals to a score of 143/8 in their chase of 201 runs and seal a 57-run victory.Bumrah’s crucial four-wicket haul helped MI book their place in the final of the tournament.

Kings XI Punjab skipper-cum opener KL Rahul and his opening partner Mayank Agarwal scripted history during this season by stitching a record partnership of 183 runs during their clash against Rajasthan Royals in Match 9 of the tournament on September 27. It was the third-highest opening wicket stand in the history of the cash-rich league and the second-highest partnership for Kings XI Punjab, behind the 202-run partnership between Adam Gilchrist and Shaun Marsh against Royal Challengers Bangalore in 2011.

A record century by KL Rahul

Kings XI Punjab skipper KL Rahul scored his maiden knock at this year’s IPL and second in the history of the tournament against Virat Kohli-led Royal Challengers Bangalore (RCB) in Dubai on September 24.Rahul played a captain’s knock of 132 runs off 69 deliveries which was decorated with 14 boundaries and seven sixes to power KXIP to a good total of 206 for three in their stipulated 20 overs.

Rahul’s knock was the highest individual score by an Indian in the history of the IPL and it is also the highest score by a wicket-keeper and a captain.

Delhi Capitals star opener Shikhar Dhawan scripted history at this year’s IPL by notching up back-to-back centuries. He became the only batsman in the thirteen years of IPL history to achieve this feat.

Dhawan notched up his first century of the season during his franchise’s ninth league stage clash against Mahendra Singh Dhoni’s Chennai Super Kings (CSK) at the Sharjah Cricket Stadium on October 17.Chasing a target of 180 runs to win, the Indian opener brought up an unbeaten quick-fire knock of 101 runs off just 58 deliveries which was decorated with 14 boundaries and a maximum.

Fresh off a blistering century in the previous game, Dhawan slammed another unbeaten knock of 106 runs off 61 balls which comprised of 12 boundaries and three sixes to guide Delhi Capitals to a score of 164 for five against Kings XI Punjab.However, the opener’s sensational efforts went in vain as Delhi slumped to a five-defeat at the hands of the Rahul-led team during that match.It was during the same clash that Dhawan crossed 5,000 IPL runs.

Chennai Super Kings (CSK) openers Faf du Plessis and Shane Watson recorded the highest partnership for their franchise during the MS Dhoni-led side’s clash against KXIP on October 4.Chasing a target of 179 runs to win, Du Plessis (87*) and Watson (83*) forged a mammoth 181-run stand to guide their side to a crushing 10-wicket win.

It was the fourth-highest opening partnership in the history of the IPL and CSK’s highest stand against Kings XI, thus breaking a nine-year-old record which was set by Mike Hussey and Murali Vijay in 2011 by stitching a 159-run partnership against RCB in Chennai.

Delhi Capitals recorded a hat-tricks of golden ducks during their tie against Mumbai Indians in Qualifier 1. Openers Prithvi Shaw and Shikhar Dhawan and first-drop Ajinkya Rahane all fell without adding any run on the scoreboard.While Prithvi Shaw fell for a duck after being caught behind the wicket by Quinton de Kock on the second delivery of the first over by Trent Boult, Ajinkya Rahane too departed without scoring any run after being trapped leg before wicket on the fifth ball of the same over.

Opener Shikhar Dhawan too fell for a nought after getting clean bowled by Jasprit Bumrah in the second over before the Mumbai Indians bowler also dismissed Delhi Capitals skipper Shreyas Iyer cheaply for 12 runs. DC lost that match by 57 runs.