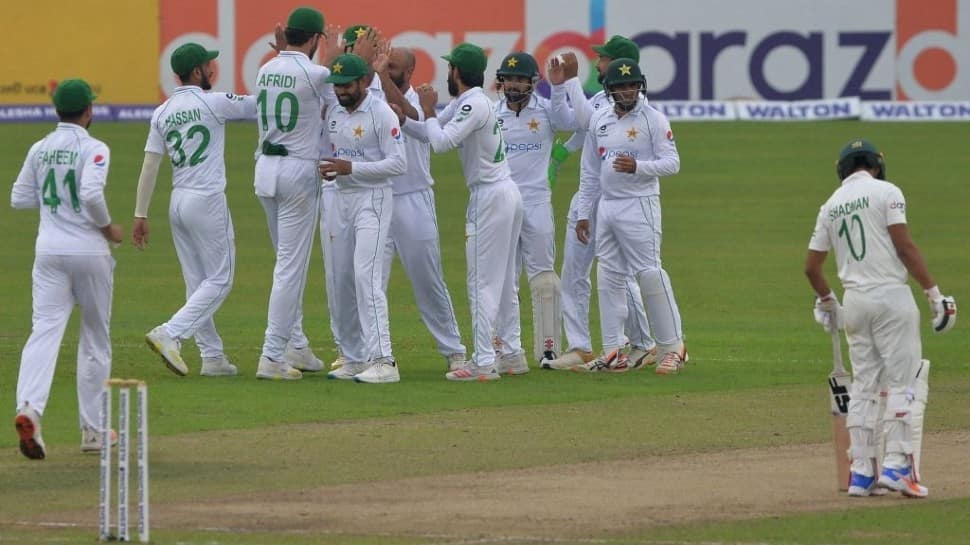 Pakistan’s hopes of collecting maximum World Test Championship (WTC) points from a rain-marred second Test got a real impetus from off-spinner Sajid Khan as Bangladesh were left wobbling at 76 for seven and requiring another 24 runs to avoid a follow-on at the Sher-e-Bangla National Stadium in Mirpur on Tuesday.

After only 63.2 overs were bowled in the first two days and the third day was completely rained-off, Pakistan declared their first innings at 300 for four after resuming at 188 for two.

In the 26 overs Bangladesh played on Tuesday, Sajid Khan returned figures of 12-3-35-6 to put Pakistan in sight of a possible victory that looked unlikely and unexpected when play commenced on the fourth day.

This was Sajid Khan’s best figures in a four-Test career after his first three Tests had yielded six wickets. His best performance in a 43 first-class matches career is also 6-35, which he is expected to improve on Wednesday, of course, weather permitting.

While Sajid mesmerised all the top-order batters, only Nazmul Hossain (30) and Shakib Al Hasan (23 not out) offered some resistance to keep Bangladesh’s slim hopes alive in the Test.

Earlier, Pakistan batted for just over 35 overs in which they added 112 runs and lost the wickets of overnight batters Babar Azam (76) and Azhar Ali (56) to declare at 300 for four.

However, Mohammad Rizwan and Fawad Alam put together an unbroken 103-run fifth-wicket stand to put Pakistan in a position where they could afford to declare and try to make a match out of it.

Rizwan returned unbeaten on a 94-ball 53 that included four fours and a six, while Fawad’s 50 not out came off 96 balls and was laced with seven fours.