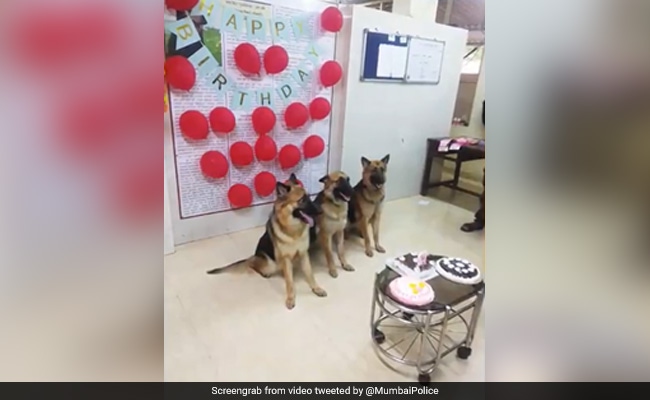 With their tongues out and tails wagging, three police dogs-in-training celebrated their first birthday in Mumbai yesterday. Honey, Maya and Whiskey were adopted by Mumbai Police last year and will soon become “vigilant sentries” deployed to guard residents of the maximum city.

The three German Shepherds were offered to the police department by a resident of the city last year in August. Since then, the cute little puppies have grown up to be fearsome dogs who will soon join Mumbai Police’s dog squad.

“The little puppies gifted to us in August last year by Rakshita Mehta will soon be vigilant sentries to shepherd the safety of Mumbaikars,” wrote Mumbai Police on Twitter while sharing a video of the birthday celebrations organised for Honey, Maya and Whiskey. “Please join us in wishing Honey, Maya & Whiskey a very ‘Happy Birthday’,” they added.

In the video, the dogs were seen with three cakes, wearing pink sashes around their necks. They were filmed sitting in a room decorated with balloons and a banner reading “Happy Birthday”.

The little puppies gifted to us in August last year by @RAKSHITAMEHTA11 will soon be vigilant sentries to shepherd the safety of Mumbaikars.

The comments section of the video has been flooded with wishes for the three future K9s.

In July last year, Rakshita Mehta had tweeted Mumbai Police, offering three puppies to them. Mumbai’s Police Commissioner Sanjay Barve had announced their adoption into the force by tweeting: “‘Can we keep him?!’ was our first reaction when @RAKSHITAMEHTA11 offered her German Shepherd puppies for the service of the police force, & the nation! We promise to train these cute pups into fearsome guardians of the city.”