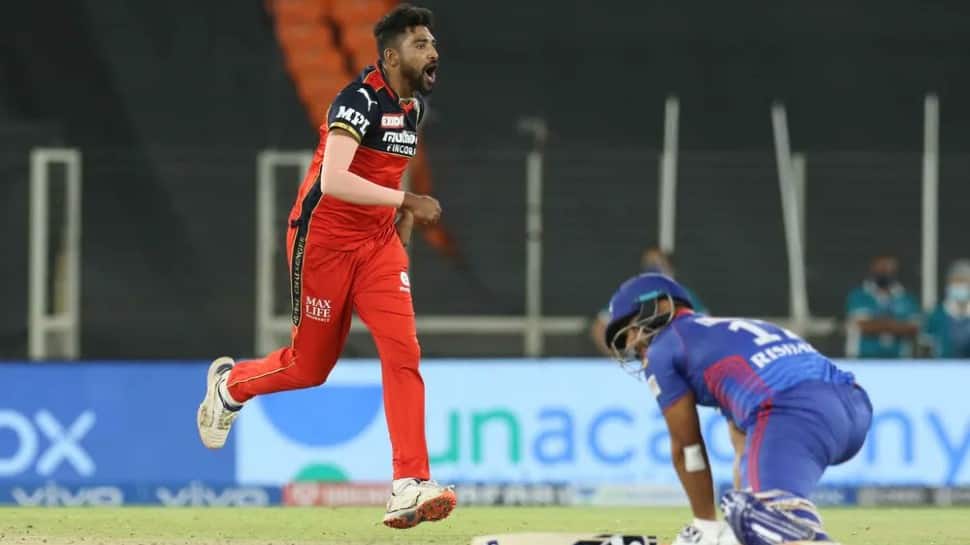 Mohammed Siraj defended 14 runs in the final over as Royal Challengers Bangalore (RCB) registered a thrilling one-run win over Delhi Capitals in the Indian Premier League (IPL) on Tuesday here at the Narendra Modi Stadium.

With this win, RCB has moved to the top spot in the IPL standings with 10 points from six games. On the other hand, Delhi Capitals is at the third spot with 8 points from 6 games.

Chasing 172, Delhi Capitals got off to bad start as the side was reduced to 28/2 in the fourth over. Shikhar Dhawan (6) was dismissed by Kyle Jamieson while Steve Smith (4) was sent back to the pavilion by Mohammed Siraj. Rishabh Pant next joined Prithvi Shaw formed a 19-run stand for the third wicket, but it was cut short by Harshal Patel as he dismissed Shaw (21) in the eighth over, reducing Delhi Capitals to 47/3.

Marcus Stoinis next joined skipper in the middle and the duo mixed caution with aggression to form a 45-run stand for the fourth wicket but as soon as Delhi started gaining an upper hand, Bangalore struck back as Harshal Patel dismissed Stoinis (22) in the 13th over, reducing Delhi to 92/4.

Shimron Hetmyer next came to the crease and he gave the much-needed impetus to Delhi’s innings and he along with Pant ensured that their side stays in the game. In the final three overs, Delhi required 46 runs for the win. Hetmyer smashed Jamieson for 21 runs in the 18th over and as a result, Pant’s side needed just 25 runs from the final overs. In the end, Siraj defended 14 runs in the final over as RCB edged past DC to register a victory.

Earlier, AB de Villiers’ unbeaten knock of 75 runs off just 42 balls helped Royal Challengers Bangalore (RCB) post a score of 171/5 in the allotted twenty overs. Along with de Villiers, Rajat Patidar and Glenn Maxwell also chipped in with knocks of 31 and 25. For Delhi Capitals, all the five bowlers used by skipper Rishabh Pant ended up taking one wicket each.

Asked to bat first, RCB lost its skipper Virat Kohli (12) in the fourth over of the innings as he was sent back to the pavilion by Avesh Khan. In the very next over, Devdutt Padikkal (17) was bowled by Ishant Sharma, and this reduced RCB to 30/2. Glenn Maxwell and Rajat Patidar then came together at the crease and the duo formed a 30-run stand for the third wicket, but the partnership was broken by Amit Mishra in the 9th over as he dismissed Maxwell (25).

The right-handed batsman was looking to go for a maximum, but he ended up handing a simple catch to Steve Smith, reducing RCB to 60/3. AB de Villiers next joined Patidar in the middle and the duo increased the tempo of run-scoring. Both batsmen mixed caution with aggression and stitched together a stand of 54 runs. Axar Patel finally ended Patidar’s (31) innings in the 15th over and RCB was reduced to 114/4.

De Villiers carried on his own in the final overs and helped RCB score 32 runs in the final two overs, taking the score past the 170-run mark.