According to sources, Azam Sheikh Jumman is one of the biggest drug dealers of Mumbai.

The Narcotics Control Bureau (NCB) has detained one of Mumbai’s “biggest” drugs suppliers, and recovered a list of his clients many of whom are Bollywood celebrities, agency sources said, adding that this could be “one of the last links” in the drugs case related to actor Sushant Singh Rajput’s death.

Accused, Azam Sheikh Jumman, allegedly got drugs directly from Himachal Pradesh and gave them to even bigger suppliers.

To escape scrutiny, he even used code words for different drugs, like “Ice-cream” for high-quality hashish called Malana Cream, and “Patthar (stone)” for cocaine, sources said.

Jumman was reportedly detained after multiple raids were conducted at various locations in Mumbai’s posh Andheri West area, including his residence.

He would be arrested after the raids are concluded and brought to the NCB office for further questioning, an official told news agency ANI.

In the raids till now, the NCB has recovered and seized 5 kilograms of Malana Cream worth Rs 2.5 crore, and small quantities of opioids (afeem) and MDMA, street name Ecstasy. The NCB officials also recovered Rs 13.5 lakh in cash from him.

A final assessment of the seizure is yet to be done, NCB officials told ANI.

According to the agency’s Zonal Director Sameer Wankhede, who is leading the operations, this is one of the “biggest” seizures of contraband in the recent days, and the biggest haul yet in the drugs case linked with actor Sushant Singh Rajput’s death. 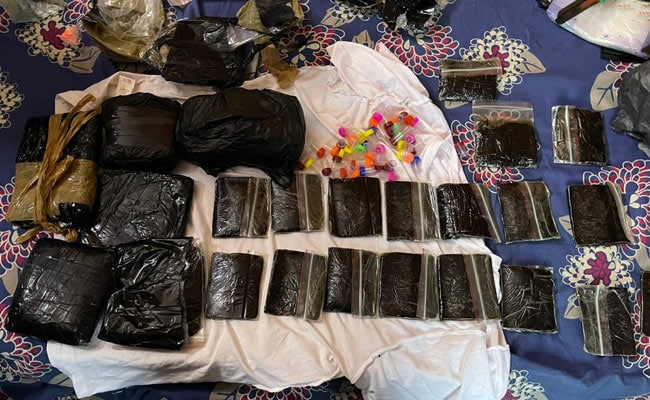 The NCB has seized 5 kg of hashish called Malana Cream worth Rs 2.5 crore in Wednesday’s raids.

Wednesday’s raids were conducted on the basis of information given by another drugs supplier Regel Mahakal who was arrested earlier in the day, and has now been sent to police custody for 2 days.

The anti-drugs agency has claimed that Mahakal and Jumman could be the missing links in the Sushant Singh Rajput drugs case that became a wider probe into the Hindi film and entertainment’s industry’s drug links.

A multi-agency probe into his death revealed a WhatsApp chat mentioning drugs after which the Narcotics Control Bureau filed a separate case in the matter.

Since then, the NCB has questioned numerous Bollywood celebrities, including Deepika Padukone, Sara Ali Khan, Rakulpreet Singh and Shraddha Kapoor, after their names surfaced during probe.

So far, 26 people, including Mr Rajput’s girlfriend Rhea Chakraborty and her brother, have been arrested in connection with the case. The brother-sister duo, accused of procuring and “financing” drugs for Mr Rajput, was recently granted bail.

Ms Chakraborty has maintained that she has never consumed drugs.

(With input from ANI)