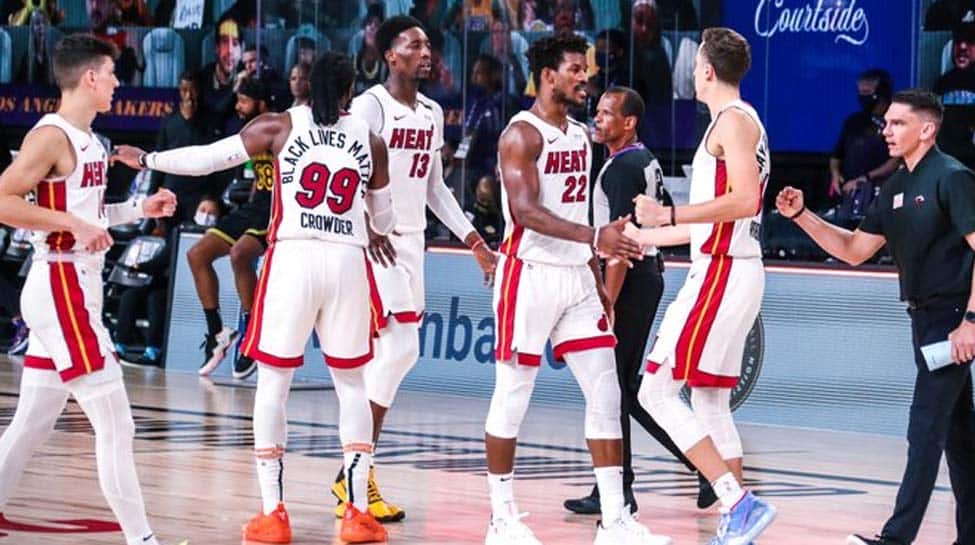 With 16.8 seconds left and 108-109 on the scoreboard, all that Los Angeles Lakers had to do was get one basket to clinch their record-equalling 17th NBA title. However, it wasn’t to be as Miami Heat held their nerves to pull off a 111-108 win in Game 5 of the 2020 NBA Finals, again on the broad and strong shoulders of Jimmy Butler.

Though star rookie Tyler Herro wrapped up the game with two free throws to keep his team in the equation, Butler’s 47-minute triple-double performance (35p, 11a, 12r) on Friday forced a Game 6.

The 31-year old became only the sixth player in NBA Finals history to record multiple triple-doubles in the same title series. He credited his team-mates for his exceptional performance.

“I got a hell of a group of guys around me that make my job a lot easier. I’m fortunate for those guys because when I pass it to them, they make shots. When I get beat going to the rim, they’re there. So, we’re in this thing together and they give me a lot of confidence to go out there and hoop,” said Butler.

The Heat had a slender one-point lead at the end of the first quarter and looked to build on it in the next one, however, LeBron James scored 15 points in the second to ensure the Heat don’t run away with the game. After attaining a four-point lead at the end of the first half, the Heat scored 28 points in the third quarter to lead by six points at 88-82.

The Lakers and Heat exchanged leads multiple times in the final quarter, however, Butler laboured his way through and ensured that Heat will continue to fight for the title in Game 6 on Sunday.